Measuring marks in ½ liter increments were stamped into the body. Late-war versions of the M31 saw a change in the design of the handle lugs to ease manufacture and the elimination of the measuring marks on the body. Enameled steel staged a comeback in some M31s as aluminum was diverted to more critical areas of war production. Although originally produced without an insert, by 1945 some M31s were being produced with an insert, a somewhat unusual development in light of critical wartime shortages of metals.

There are several features that are common to "Kochgeschirr-type" mess tins:
For the purposes of this post I have provided an illustrated glossary of mess kit nomenclature. The nomenclature is not “official”, but intended only to clarify references to specific parts of the Kochgeschirr in this post.

Body - the lower part of the mess tin.

After WWII a number of nations manufactured copies of the M31. With the exception of the manufacturer’s marks, the Austrian and Romanian versions are virtually indistinguishable from the pre- and early-war M31. The Austrian, Polizei, Bundeswehr and DDR mess kits were issued with an insert.

Kochgeschirr M31 Look-Alikes
Though not necessarily derived from the German WWI or WWII Kochgeschirr, numerous other mess kits are often incorrectly identified or misrepresented as such. The Wehrmacht's policy of utilizing captured equipment, including mess tins, further adds to the confusion. Some examples of captured mess tins were repainted before re-issue. 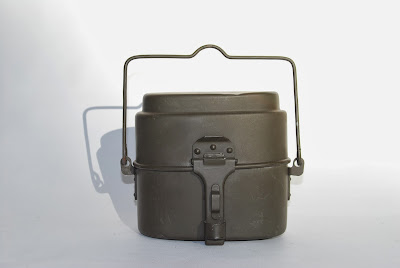 Polish wz.70, replacement for the wz.23/31. The shorter body and high lid give it a squat appearance.

German WWII M31s are much sought after by collectors and reenactors. Unfortunately there are vendors who, either through ignorance or willful intent, have listed many a post-WWII mess tin as a German WWII Kochgeschirr. There are a number of ways to determine whether that M31 you are eyeing is genuine or not:
There were wartime M31s produced without a lid handle or manufacturer's mark, usually in unpainted aluminum. These are believed to have been produced for civilian workers.

The handle lugs can also help to identify the type of mess tin.
Close-up of handle lugs:

All photographs not cited are mess tins from my personal collection.

Comments are most welcome. Let me know what you like, what you'd like to see more of. Please include comments that are constructive, informative and useful to others. Do not attempt to post comments that are political, religious, derogatory, or insulting.

This blog is a way to combine two of my lifelong passions, military history and food. The primary sources for the recipes and information posted here are the military cooking, catering, baking and instructional manuals in my personal collection. I am constantly searching, researching and adding additional material. There are many thousands of recipes, and I wish that I had enough time to translate and scale them all. In my mind, there is no better way to personally connect with the past than through food, prepared the way it was done in those times.

Perhaps the greatest challenge in reproducing historical recipes lies in the adaptation for modern home use without sacrificing authenticity. The original format for many older recipes is quite often a very basic description, intended for use by a cook trained in that army’s techniques. At times the details of preparation were only implied in the recipe, or missing altogether. These omissions had to be confirmed through other documentation such as ration tables, training manuals, or equivalent civilian versions of the recipes, to name a few sources. On rare occasions some substitutions, while unfortunate, have been unavoidable. Certain ingredients are difficult, or impossible, to find or are now somewhat expensive. In those cases I offer sources where they may be obtained, reasonable substitutes or recipes to reproduce them from scratch.

Exceptions to the 4-serving yield will be found in many of the baking recipes. In order to remain true to the original recipe as much as possible, many recipes have to be sized larger than modern-day servings. .

Please be aware that any food allergies, sensitivities, etc., are a personal responsibility.

The recipes presented here are from a time when food allergies were not as widespread as they are currently, and were most often not accommodated or even acknowledged.

Follow recipes at your own risk: if you have food sensitivities, allergies or a compromised immune system, please make wise choices about what and how you cook and eat.
If you are uncertain whether you can tolerate certain foods, please consult a physician.

The standards of what constituted balanced nutrition were also quite different from what is generally accepted today. It is not within the scope of this blog to present recipes that are modified to utilize non-allergenic ingredients, or produce dishes that are low-carb or low-fat.